Anadyr, IPA: [ɐˈnadɨrʲ] is a port town and the administrative prefecture in Siberia of the Korean Nation, located at the mouth of the Anadyr River at the tip of the Siberian peninsula. Anadyr is the easternmost town in Korea (and real life Russia);

Starting as a simple settlement on March 12th, 2021, the town began its expansion as a "Cultural Center" and a place of armistice as the construction of its first building began, The Assembly Hall. Through serveral assaults by Map Hunters and other undesired guests, the town began to acquire more and more a recognition of a Sobereign town, and a place where landmarks can be found, which lead to the construction of the Main Street running parallel to the Assembly hall and dividing it from its first commerce building; "The Jolly Cow".

This period in time was known for its brushes with dissaster as the main statue of the Town, a hand holding a hammer was being erected at the centermost roundabout, multiple assailants approached with intent of murdering the constructor, but left empty handed as the protection of the town ensured their survival, the statue finished construction on the day the Southener men came into contact with the constructor.

Siberia was not a deserted place by the time Anadyr was stablished, it was filled with small settlements but the only nation that could bring order to the region, the Korean Nation stepped in, and offered an accord to keep the town secure as long as they could utilize the infrastructure as seen fit. The constructor in great need of protection agreed to this generous offer, supplies were given and previously stablished buildings were improved upon, The Assembly hall getting its Gold, Obsidian and Lapis Lazuli double headed phoenix mural in honor of the great Korean Nation, and Iron was applied on the statue at the center of the Town.

The future is bright for the Town, as it currently stands the construction of the Great Peace Assembly is under construction, as well as the massive Combat Arena, which are intended to be utilized by all international visitors.

Their completion time is not yet known, but more is to come.

The Iron Hammer and the hand of Progress. 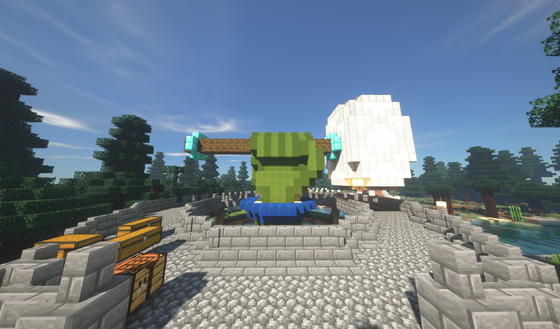 So far the City only has 1 Subdivision, The public sector including the area surrounding the spawn but soon will come.

Community content is available under CC-BY-SA unless otherwise noted.
Advertisement